Are the outdoors too harsh for 3D printed objects? In this article, we will discuss which are the best 3d printer filaments for the outdoors. Can 3D printed projects fare well under the elements? Also, will PLA be a good filament for outdoor applications despite being “biodegradable?” 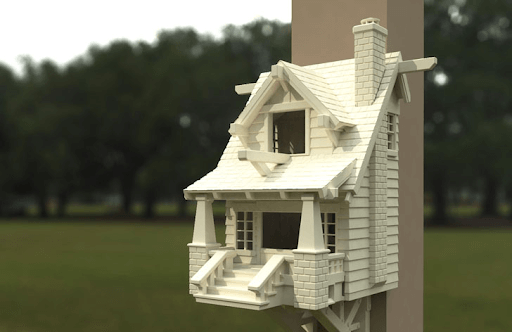 There is no limit to what you can 3D print, or is there? Outside elements such as sunlight, rain, wind, and hail can be detrimental to 3D prints, but some filaments can endure outside conditions. We have prepared a list of the top 5 materials that you can use for outside prints. We rate each filament in terms of resistance to elements, price, and ease of printing. 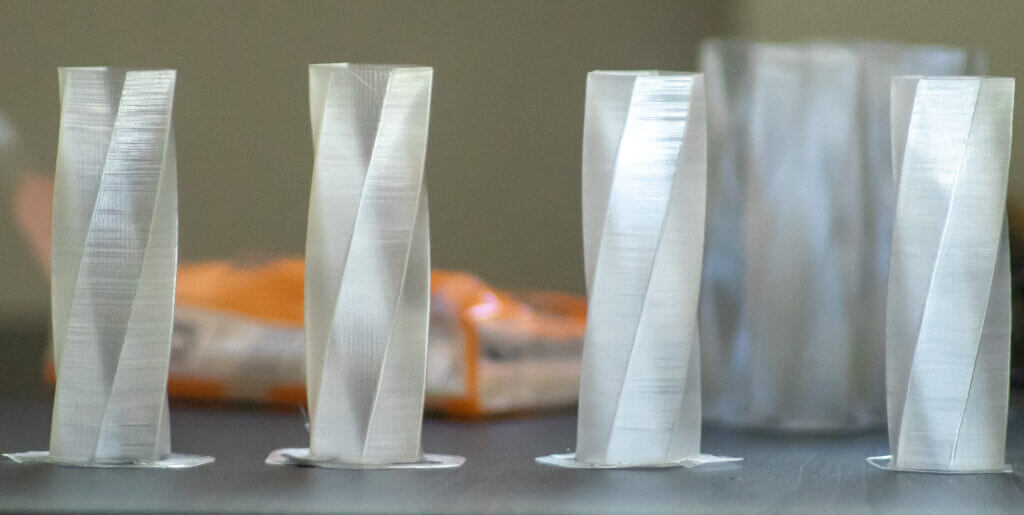 PETG, or Polyethylene Glycol, is a material similar to the famous PET which is used commonly in water bottles. Both have very similar properties except that PETG has glycol, which permits for more flexibility, thus improving impact strength, durability, and temperature resistance.

PETG is growing to be a more common filament in the community. As compared to ABS, PETG is more expensive, but an easier filament to work with. PETG prints with about 230 to 250 °C, similar to ABS, but with a lower heat bed temperature of 75 to 90 °C. PETG is not sensitive with drafts as well, so no need for printer enclosures.

Is PETG Good for Outdoors?

PETG is very suitable for the outdoors as it is UV resistant, plus its strength is almost the same as ABS. PETG may exhibit some discoloration under prolonged exposure to direct sunlight, but there will be no other effects other than that.

PETG is a top recommendation for printing outdoors as it can resist UV radiation and impact very well. For its price, PETG is not an expensive material but costs more than ABS and PLA. PETG is also very much easier to print than ABS, ASA, TPU, or PC, but a bit harder than PLA especially because PETG is known for its issues with being stringy. 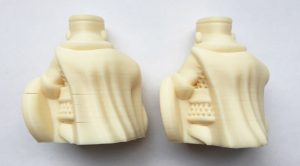 ASA (Acrylonitrile Styrene Acrylate) is very similar to ABS (Acrylonitrile Butadiene Styrene), except for one advantage: ASA is UV resistant. ASA was made as an alternative to ABS, being more UV resistant and better properties: higher temperature and impact resistance.
In the case of 3D printing ASA, it behaves similarly to ABS:

Depending on your filament brand, ASA can be printed easier than ABS. Other manufacturers claim that there is no need for a printing chamber when printing ASA.
In terms of pricing, ASA is more pricey than ABS, about the same price range as PETG of about $30 per 1 kg and above.

Is ASA Good for Outdoors?

Being created to resist UV radiation, ASA is a priority choice when you want to create outdoor 3D printed projects. The improved mechanical properties also make it a better choice for prototyping projects as well.

What makes ASA lower in our list is its ease of printing. Compared to PETG, ASA will be harder to handle due to the temperature requirements, as well as its sensitivity to warping during printing.

Being made to resist UV and is durable enough to sustain impact, ASA is our second recommendation for outdoor 3D prints. Although it costs the same as PETG on average, ASA is harder to print with its printing requirements. 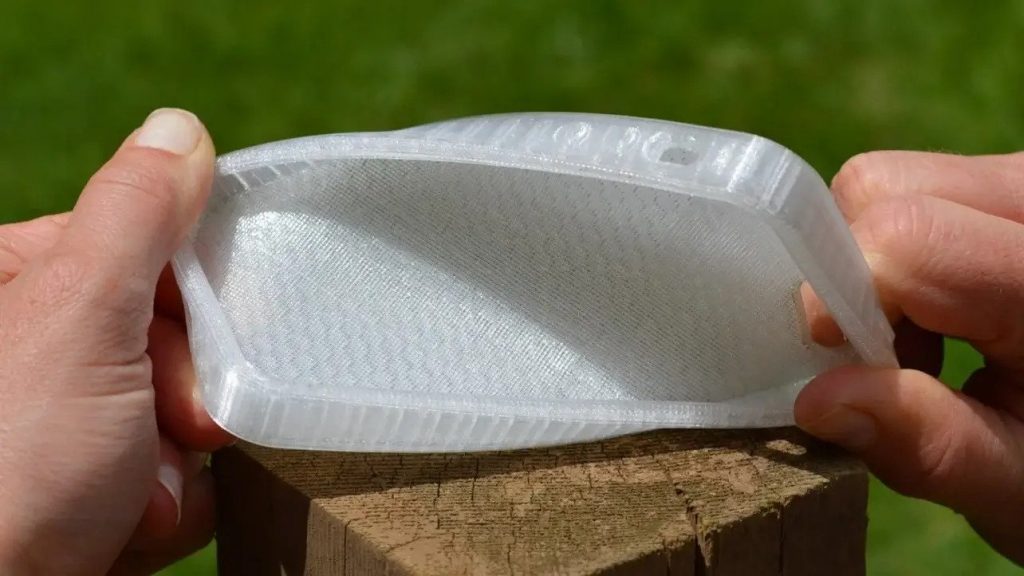 TPU (Thermoplastic Polyurethane), or TPE (Thermoplastic Elastomers) in general, are filaments that can be used to create flexible prints. TPE filaments are made with a blend of rubber and plastic, which have different varieties, depending on the degree of elasticity. These different degrees of elasticity are then measured and classified with the Shore hardness scale.

In general, TPU is printed at about 210- 230 °C extruder temperature, with bed temperature at about 45- 60 °C, similar to PLA. However, TPU can be a more difficult filament to print with. Especially for printers with Bowden extruders, TPU can get stuck before the print head as it can flex during printing. For TPU, it is recommended to use printers with direct-drive extruders, especially when using TPU with higher flexibility.

Is TPU Good for Outdoors?

TPU has several properties that are very favorable for outdoor conditions:
Abrasion resistance: TPU resists wearing on its surface better than Nylon, PTFE, and natural rubber.
Good Impact Resistance and Flexibility
UV Resistance: Some TPU filaments are stable even when exposed to UV radiation, and do not show discoloration.

TPU may be known more popularly as the flexible filament, however, it can be a recommended filament for outdoor use, too. The flexibility of TPU will fair very well against impact, plus its abrasive resistance will also prevent possible damage from sliding or rubbing against other hard surfaces. 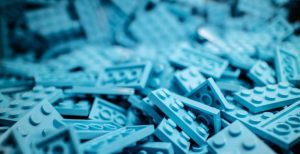 The cheapest filament in this list, ABS, is a good filament for the outdoors. Acrylonitrile Butadiene Styrene is a popular material that is temperature-resistant, durable, and corrosion-resistant.

Commonly used in toys, electronic enclosures, and household appliances, ABS is favored among other materials for its price. In 3D printing, ABS can go as low as $10 per kilogram of filament.

ABS is a more durable material than PLA and PETG, so sudden forces that can knock down your print won’t cause breakage. It is also wear-resistant, meaning it won’t easily deteriorate from strong chemicals and repetitive usage.

Is ABS Good for Outdoors?

ABS can endure the outside for two reasons: Heat resistance and durability. The maximum working temperature of ABS is about 100°C, making it fare very well against the sun’s heat.

However, even ABS takes the outside heat well, in terms of the sun’s UV, ABS will need protection. Painting ABS parts will be necessary if your print will be exposed to the sun too often.

Printing ABS may be a difficult experience for some. Despite the low cost, this material is hard to print because of its temperature requirement. ABS is printed typically with 230 to 250°C extruder temperature. It also requires a bed temperature of 90-100 °C.

To prevent warping, ABS is recommended to be printed in an enclosure. Printing without an enclosure can be successful, but additional solutions have to be made, such as mounting your prints in glue or ABS slurry or turning on a draft shield.

To conclude, ABS is a cheap and sturdy filament. It fares well in temperatures below 100 °C, but in terms of UV resistance, ABS needs additional protection like paint. The low price is a very good advantage of ABS, but there is a need to prepare or select a 3D printer to print it successfully. 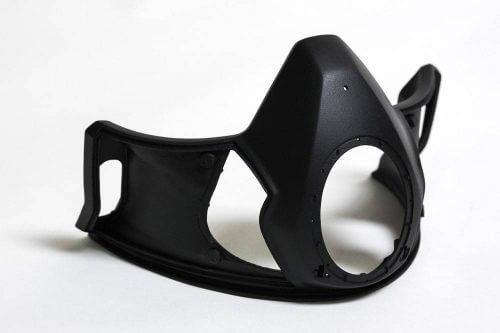 Intended to be used for heavy applications, polycarbonate filament is a recommended filament for engineering-grade use. Resistant to high temperatures, impact, and breakage, polycarbonate fairs very well in the outdoors.

Polycarbonate is often used in products that are exposed to rough conditions, such as electronic components which can be exposed to high temperature and fire, and construction materials that are durable against extreme weather but lightweight.

Is Polycarbonate Good for Outdoors?

This material is very good outdoors, given that it is also UV resistant. Its working temperature is around 150 °C, very high as compared to direct sunlight exposure. Polycarbonate can also resist shock loads, so prints can endure sudden impacts better than any other material in this list.

Although polycarbonate satisfies most of the requirements for an outdoor filament, this filament type has a lot of drawbacks on price and printability. Polycarbonate suffers from being a hard material to print with, even against ABS.

The temperature requirements also mean that a bit of change in the ambient temperature can cause warping. Also, make sure that the filament is kept well in dry conditions because polycarbonate is very hygroscopic.

Polycarbonate is a very good filament to use; in fact, too good for outdoor prints. As it is made for engineering-grade applications, the price and difficulty in printing make it not worth using. Instead, filaments like ASA and PETG can do the job as well for simple outdoor projects. 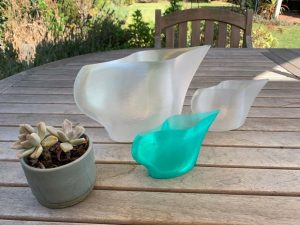 Filaments that are capable of the outdoor elements may be relatively more expensive than PLA, with the exception of ABS. Polylactic acid is known to be the easiest filament to print with, however, it comes with disadvantages when using them for outdoor prints. Can you still use them outdoors? Yes, many users have printed PLA for outdoor use, but with limitations.

The popularity and availability of PLA have made it very useful in many applications. In the 3D printing community, although not recommended as the filament to use for outdoor prints, there are numerous proofs that PLA can be used to some extent. You can see numerous PLA 3D printed projects that stood the test of time out in the harsh environment.

On that note, should you instead print with PLA than other more recommended filaments? You can, but with limitations. There are specific projects that can make PLA justifiable outside, and there are prints that are not recommended to be made using PLA.

Why Use PLA Outdoors?

Despite how PLA is known to be a biodegradable material, it does not really degrade naturally. The conditions to degrade PLA are far more extreme than the normal weather. That said, PLA can pretty much handle degradation as with other materials. You can see this video that shows how PLA can endure the outdoors even after 2 years.

Don’t print with PLA if…

Decorative prints can be a good way to use PLA outdoors, but this material is not recommended for functional prints. Prints like lamp holders, brackets, or phone holders can be more harmful if PLA is used due to the danger when it warps under the weight of the things they hold.

Because PLA is a brittle material, drops, extreme wind, and impacts can cause breakage of your print. Opt for more impact-resistant materials such as ABS, ASA, or TPU if you want them to withstand these forces. 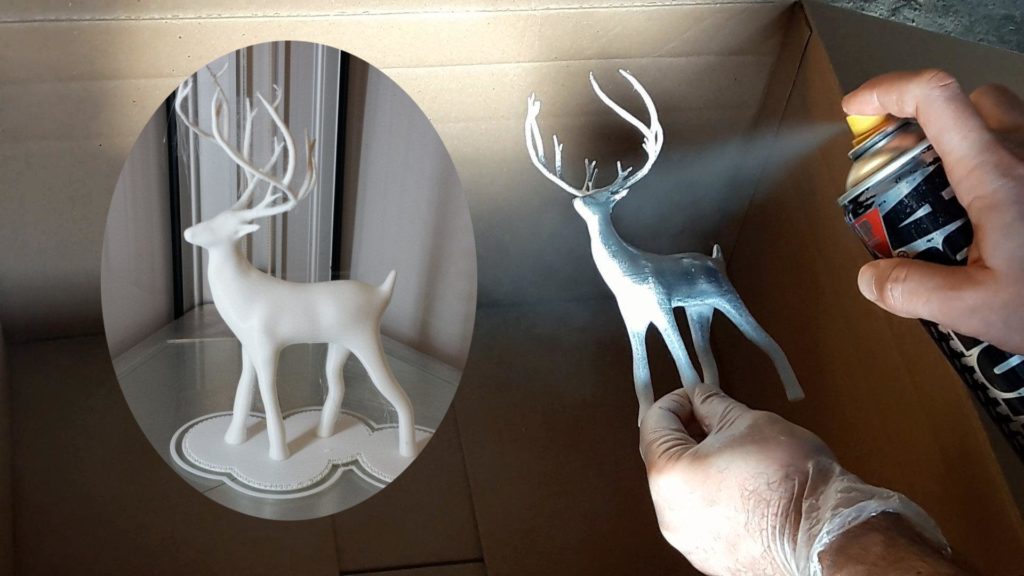 Image Source: 3D With Us

The effects of outdoor elements can be greatly decreased by post-processing your 3D prints, particularly coating them with UV-resistant materials. With heat and UV-sensitive materials namely PLA and ABS, an extra covering on your prints can lessen the heat and UV radiation. Paint can reflect some heat off, preventing warping.

Hope you have your questions answered through this article, and found the best filament you would want to print for the outdoors. These filaments have their own unique properties that make them fair better against the elements. These can all depend, however, on your specific print and your budget.

Why is PLA filament the most common material for 3D printing? Moreover, why is it good to start with...
Need to know how long your PLA filament will last? In short, when you place PLA under normal room...